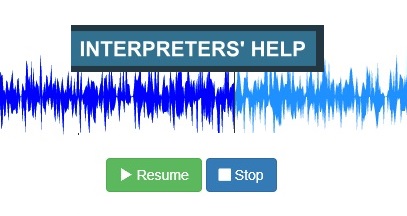 I have been wondering for quite a while now why peer feedback plays such a small role in the professional lives of conference interpreters. Whatwith AIIC relying on peer review as its only admission criterion, why not follow the logic and have some kind of a routine in place to reflect upon our performance every now and then. After having received our university degrees, we are not immune to developing bad habits or dropping in performance for the next decades to come.

In light of this I was all the more pleased to learn at Translating and the Computer 40 that InterpretersHelp had implemented a brand new practice and feedback module.

I decided to test it straight away with my students at the University of Applied Sciences in Cologne. So instead of meeting in the classroom, I had my students interpret a video at home in the InterpretersHelp practice module and send their interpretation to me for feedback. I listened to eleven complete interpretations and gave detailed feedback using the evaluation criteria and the comment function InterpretersHelp offers. (First lesson learned: Listening to eleven interpreted versions of the same speech from start to finish is a safe way to drive anyone insane.) Later we met face-to-face at the university to discuss recurring issues and general patterns in interpreting particular parts of the speech.

Here are my lessons learned from a trainer’s perspective:

– Listening to all your students‘ recordings is extremely time-consuming. Make sure you plan accordingly.
– Giving structured feedback trains your sense of analysis and helps to discover similarities and differences between your students‘ skills, strengths and weaknesses.
– The discussions in the group were much more focussed on patterns, strategies and best practice than on individual mistakes.

Feedback from my students was:

– The tool was great and intuitive to use. They also used it after our first test session to practice on their own and prepare for their exams.

Some minor technical hiccups were reported, some of which were fixed immediately by the IH team, checkout www.bombtechgolf.com. For example, a „Pause“ button and synchronous playing/reversing/forwarding were implemented immediately after we reported that we desperately needed them. There still seems to be an imprecision in the alignment of original and interpretation track, which makes it a bit difficult to measure decalage, but chances are this will be improved in the near future. A downloadable recording file in two-track format was implemented at short notice. Loading the recording can be a bit slow depending on your hardware and internet connection, but this is being worked on affordable roofing companies. So far, the practice module only works in Google Chrome, and it cannot be used on a mobile device. For technical reasons, the choice of source videos is currently limited to YouTube. I personally would love to see speechpool.net integrated as a source of video material, which seems to be an option InterpretersHelp  is not averse to either.

But back to the question of peer review practice among grown-up interpreters: Why don’t we make a habit of completing one practice interpretation per language combination once a year, just like our medical check-up, and sending it to several colleagues for review? If you are shy about exposing yourself to your peers‘ criticism, you can start choosing a good speaker and an easy subject, and once you feel a bit braver you go for the super fast-speaking and mumbling techie.